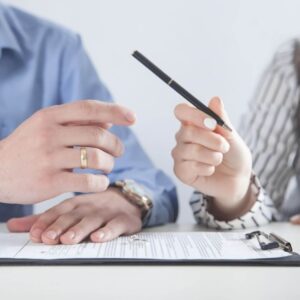 Somewhere between 20-40% of all marriages experience some form of infidelity during their marriage. When there is infidelity in a marriage, whether that’s a physical or emotional affair, it often pushes people toward divorce. It’s important to differentiate that it’s not ultimately the only reason that the couple is getting divorced. Sometimes when a partner wanders outside of the marriage it’s due to not feeling fulfilled by their spouse’s efforts. What I mean by that is that if you are having an emotional affair with someone you might be doing that because this person makes you feel heard and wanted, something that you may feel is missing from your marriage. I’m not saying that infidelity is justified or is the right way to deal with what the partner is missing in their marriage.

It’s important for both sides to consider why this person had an affair and that if they choose to get divorced it’s not solely because the one person had an affair. Things may have been going wrong for a very long time but neither party was ready to make that move to get a divorce. If the couple ultimately does get divorced often the infidelity is the catalyst that pushes them towards finally getting divorced. This is important to consider because I often witness a couple come in for mediation and the loyal spouse blames the other spouse for why they’re getting divorced. This shifts the focus on the other person’s faults and does not examine what happened that puts them both at fault.

People also seem to think that financial issues are the main reason for divorce. Nearly half of Americans who are married or living with a partner say they argue with that person over money, and most of those fights are about spending habits. Studies have shown that 41% of Gen Xers and 29% of Boomers say they ended their marriage due to disagreements about money. They agree that if you’re arguing about money early on in your relationship that may be the best predictor as to whether you end up getting divorced. Whether it be about spending habits, someone being dishonest about money, how to divide bills or disagreements over a couple’s financial priorities in life can be a big part of the reason that people get divorced. However, it’s more about the communication issues that arise about the finances.

It’s important to remember that communication isn’t just about what you say, it’s also about what you don’t say with your non-verbal cues and is also just as importantly about what the other person does or does not hear. If the person you’re trying to communicate with takes what you’re saying in a way you didn’t intend, it doesn’t matter that you didn’t intend for it to land that way because something about what you said or how you said it landed wrong with them. For example, if you say to your spouse “why didn’t you tell me that we’re out of eggs” and you just think you’re asking a question of them, and your tone of voice is tinged with blame that they’re the reason that there aren’t enough eggs then that very well may upset them. Now just because you didn’t mean to upset them, doesn’t mean that they aren’t still upset.

Communication issues in a marriage can take on many different forms. It could be that you say something that made sense in your mind and your spouse takes it in a different way. Or it can have to do with your tone of voice and non-verbal communication telling a different story from what you’re saying. Or it can be a complete lack of communication where there are issues or things that should be discussed with your spouse and you’re just not talking about them. None of us are mind readers and without communicating and communicating clearly with another person we can’t tell what they intended.

Leave a comment and hear from one of our trusted Mediators:

This website uses cookies to improve your experience. We'll assume you're ok with this, but you can opt-out if you wish.ACCEPT REJECT
Manage consent